You are here:
May 27, 2016California, Minerals, Rock ClimbingBy Shant Minas 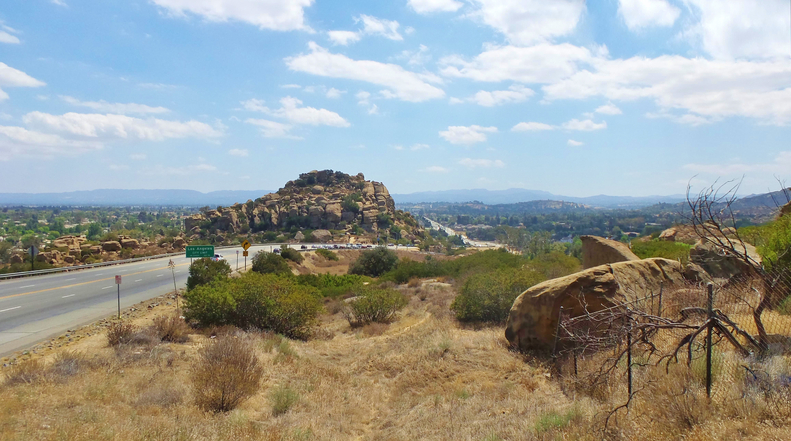 If you’ve ever cruised up Topanga Canyon or driven west on the 118 freeway, you’ve doubtless dropped your jaw in wonder once or twice at the towering sandstone rock formations known as Stoney Point.

Stoney Point is a historic local proving ground for up-and-coming rock climbers in the Los Angeles area, dating back to the 1930s. The impressive formations (which include cliffs, boulder piles, and caves) came into existence around 65 million years ago! That’s right, those same rocks that you can scramble around on were formed during the late Cretaceous period, when Tyrannosaurs were still roaming the western part of what is now North America.

Try wrapping your mind around that one, and you’ll get an idea of the kind of thrill geologists get from studying these types of formations. We consider 5,000 years ago to be ancient, and these rocks are approximately 13,000 times older than that. For more context, when Stoney Point was formed, mammals were only just becoming common on the planet, and the ones that existed were still small and not particularly varied.

How Did Stoney Point Get There?

Stoney Point is the most well-known outcropping from the larger feature known as the Chatsworth Formation in Simi Hills. According to Ralph Reed’s Geology of California, the Stoney Point rocks formed in the Pacific Ocean somewhere near Central America or Baja California. In the ocean all those years ago, massive turbidity currents deposited large quantities of silt and sand, which eventually turned into the distinctive features at Stoney Point. To this day, if you closely study the rock at Stoney Point, you’ll be able to see the erosion from the turbidity currents.

So how on earth (no pun intended) did these huge sandstone piles get from the ocean floor near Central America to their current spot on land in Chatsworth?

Simply put, the Chatsworth Formation found itself deposited fortuitously at the meeting of the North American Plate and the Pacific Plate. When these two massive plates exert their force against one another, the Pacific Plate “loses” the battle and is pushed upwards by around 2.5 inches per year. Over the course of millions of years, all those inches added up, and the formation came to rest in its current location.

Stoney Point’s sandstone is of a consistency and grain that makes it very suitable for climbing. Although sandstone has a tendency to be a bit rough on climbers’ hands, most of the main climbs at Stoney Point have had their holds polished over nearly 100 years of climbing activity. Interestingly, the distinctive orange color of Stoney’s rocks are due to oxidation over the years, and is nothing like the rock’s original color (gray).

There are two main styles of rock climbing: bouldering (unroped attempts to climb smaller boulders and rock piles) and free climbing (roped ascents of larger rock faces). Stoney Point has generous opportunities for both, and on any given day you can walk around the formation and watch the climbers do their thing.

The list of rock climbers who learned their skills at Stoney Point reads like a “who’s who” of great climbers throughout history. Royal Robbins, Yvon Chouinard, Bob Kamps, John Bachar, and many others all developed their skills at the iconic Los Angeles crag.

If you’re fascinated by either rock climbing, or just rocks in general, take an afternoon to go visit the Upper Cretaceous wonder that is Stoney Point, a Los Angeles Historic and Cultural Monument since 1974. It might just rock your world!