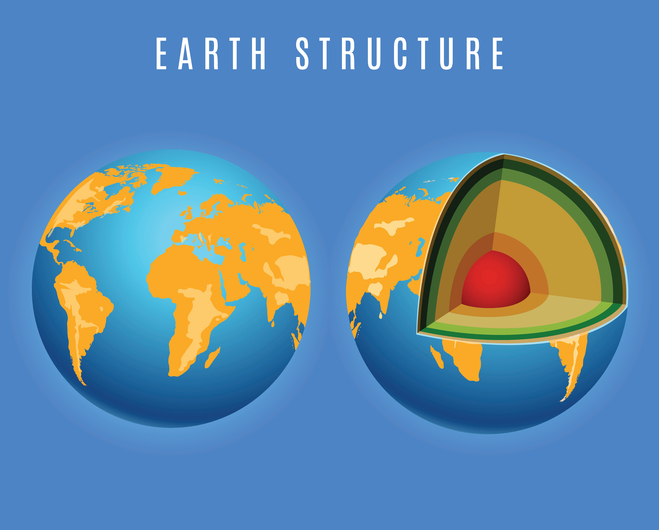 Geologists have taken a new approach to modeling the Earth’s core. Their surprising conclusion: It contains more oxygen than we used to think.

In a radical step away from the tradition of looking at the Earth’s core (center) and mantle (surface portion) separately, scientists have taken a look at the geochemical signatures of each with a new model that considers how the two might interact. This new model concludes that the core began as an iron-rich metallic planetesimal — basically a solid blob like a small planet — which dropped into a molten sea and descended towards the middle.

Geologist Rick Ryerson and his colleagues came up with the inference that there is more oxygen in the Earth’s core by using this new approach to examining the models we already have. It is believed this casts new light on the formation of the Earth billions of years ago.

The study concluded that the unexpectedly high concentration of oxygen in the core fits with the idea that an asteroid-like body, called a planetesimal, had to play a role in the formation 4.56 billion years ago. These bodies are made from rocks and other materials and typically have a high iron content. They can be anywhere from a few meters across to hundreds of kilometers.

Over tens of millions of years, the newborn planet gradually grew, acquiring additional material and additional energy from repeated impacts by space bodies, such as asteroids and planetesimals. The energy added to the system helped keep things hot enough for rock to remain liquid, like lava. Gravity began the process of separating metal and silicate. The heavier metals fell to the bottom, becoming the Earth’s core. The lighter silicate rose to the surface and became the mantle.

Previous attempts at analysis only looked at the geochemical signature of each by itself. This is the first time that experts have considered both sets of signatures and what that suggests about their relationship to each other and for the evolution of the earth as a whole.

The analysis combined mineral physics, petrology, geochemistry and seismology. Their conclusion: The core formed in a hot magma ocean no more than 1,800 kilometers deep in more oxidized conditions than we have presently. This new model is a significant departure from all previous models. They concluded that there is more oxygen in the core and lower levels of silicon than previously believed.