How Was Yosemite Formed? 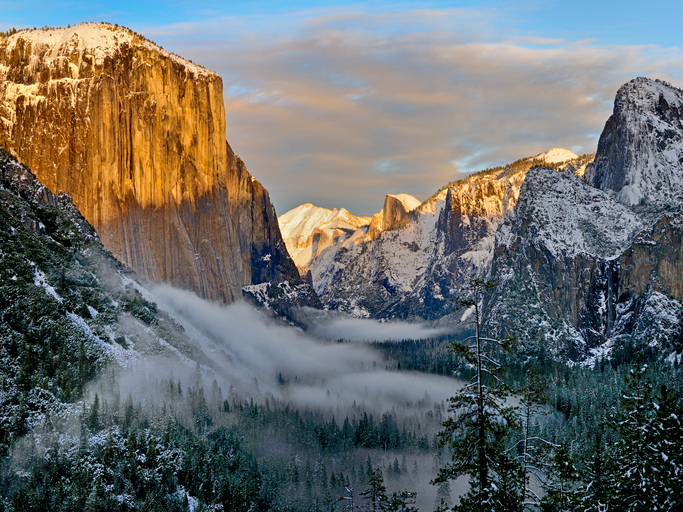 If you’ve ever been to Yosemite Valley, you’ve no doubt stood and stared in wonder at the unreal vista that greets you as you peer at the sweeping meadows and granite cliffs. There is arguably no place on the entire planet that is as perfectly picturesque, as seemingly well-composed as though it were created with the utmost intention. The “tunnel view” as you look down the Valley toward El Capitan and Half Dome is one of the most iconic scenes on our globe.

So, how did such a pristine and flawless geological wonder come to exist? Well, things all started with a volcano chain that deposited large quantities of cooled magma that turned into granite. This massive granite collection existed as the geological foundation for the area, but how did the Valley itself emerge?

It’s hard to wrap your mind around what the Earth might have been like 50 million years ago — in fact, it can feel nearly impossible just to conceptualize the idea of a point in time that long ago. Yet, in that ancient time, the area we know as Yosemite today was lying relatively dormant, consisting of gently rolling hills and a few minor streams. One body of water, however, was beginning to assert itself more than the rest. The Merced River wound its way through a shallow indentation in the valley, the genesis of what would eventually shape the valley path.

About 10 million years ago, a full forty million years after we last checked in on the Merced River and the calm, forested landscape, things began to become a lot more geologically volatile. The entire area experienced upheaval, and what once were gentle hills began to thrust upward into more defined peaks. As well, the Merced River found itself sloping downward, creating an even more defined path through the valley and pushing the valley floor lower as the peaks around it grew taller.

About 3 million years ago, the area we know as Yosemite was beginning to change more drastically than ever before. The forested hills that once dominated the landscape were beginning to more closely resemble dry canyons, the burgeoning peaks taking on a more jagged look as the Merced River continued its unrelenting advance. The geological uplift continued during this time with no signs of stopping, while the climate began to change as well. Temperatures grew colder in the valley, and the once lush landscape began to thin out.

Welcome to the Ice Age, where glaciers descended upon the Yosemite Valley, filling the massive valley groove with solid ice. Parts of the Valley and the surrounding rock were totally encased in ice, with only the tallest peaks jutting above the frost. As the glaciers advanced through the Valley, they took no prisoners, so to speak. In the path of the glacial advance was a clean cut swath that carved the Valley into an even more steep and well-defined “tunnel.” The glaciers’ march through the Valley was absolutely relentless, with the power to shape even gigantic sheets of granite.

About 30,000 years ago, a smaller (but still relatively massive) ice sheet known as the Yosemite Glacier passed through the Valley. Although this ice sheet was not powerful enough to make any further substantial carvings into the Valley shape, it did serve to polish the massive walls further, smoothing the faces and defining the rocks’ iconic shapes.

The last of the glacial ice finally melted away, first leaving a massive lake, and then turning to essentially a basin of silt and glacial till. This laid a fantastic ecological foundation for the gorgeous flora that would emerge across the relatively level Valley floor. The result? An incredible, “U” shaped Yosemite Valley featuring incredibly massive, sheer granite cliffs surrounding a narrow, grassy valley floor. 50 million years worth of geological upheaval and glacial sculpting left one of the Earth’s most breathtaking natural jewels.