How Do Wildfires Affect Soil? 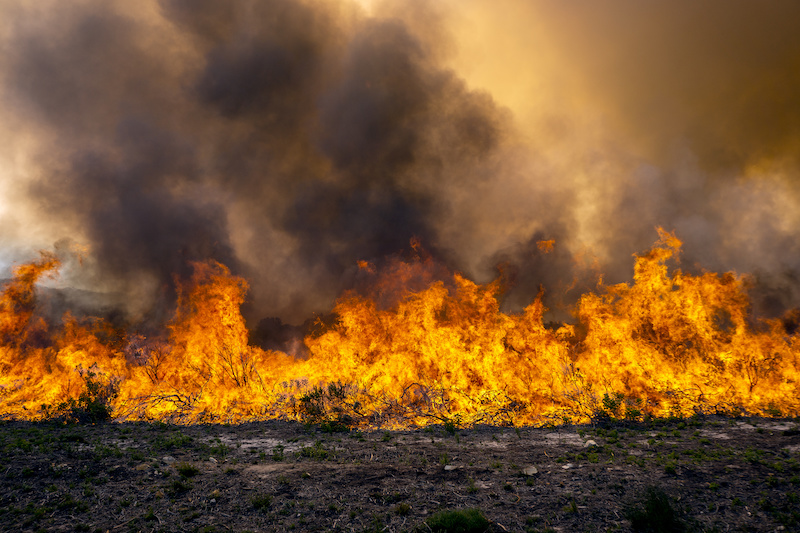 The most dramatic effect of a wildfire is to burn away all of the vegetation and the dead organic matter on the surface of the soil. In a forest environment, there are six layers of organic matter on the surface of the soil, starting with fresh fallen vegetation and moving down through successive layers of increasingly decayed vegetation. Grasslands have a slightly different arrangement, where a thick layer of living roots makes up most of the top layer of the soil with litter and decaying vegetation overlying the root mass.

In addition to its role as a nutrient source, the surface organic layer chelates potentially toxic metals and acts as a cation exchange reservoir for important molecules like calcium and potassium. It is also partially mixed in with the surface soil and improves the aeration properties of the soil.

Normally, it takes a long time for the vegetation to decay sufficiently to release its nutrients into the soil, sometimes decades, but fires accelerate this process. How does wildfire help restore soil nutrients? It instantaneously destroys the living and decaying vegetation and suddenly releases all of its nutrients, such as nitrogen, sulfur, phosphorus, and carbon. Unfortunately, most of the nitrogen is vaporized and lost to the atmosphere. Therefore, after a fire, while in general the soil is heavily enriched with nutrients it tends to be nitrogen-deficient.

Erosion can rapidly become a significant problem after a wildfire. Normally, roots and organic matter hold soil in place and help retain moisture in the soil, and the removal of these materials can result in significant soil movement in response to wind, rainfall, and gravity. A burned-out arid grassland that is then subjected to high winds can create dust storms and scatter the soil over significant distances. Heavy rainfall after a wildfire can create deep gullies and landslides and end up transferring most of the soil into local creeks and ponds.

The community of microorganisms in the soil significantly affects its chemical properties and the bioavailability of nutrients to vegetation. The extent of a wildfire’s impact on the soil biome depends on how hot the fire burns; a quick burn that sweeps across taking out the surface vegetation won’t result in significant heating of the soil, but many wildfires burn very intensely and can increase the temperature of the surface soil to 1500 degrees Celsius or even higher.

Unfortunately, the nitrogen-fixing bacteria seem to be extremely susceptible to heat and are often completely destroyed by a wildfire. In addition, endo- and ectomycorrhizae organisms, which form symbiotic relationships with plant roots and play significant roles in feeding plants, are also often completely destroyed by wildfires and their loss from forested areas can impair tree growth for significant periods of time after a fire. How long does soil take to regenerate after a wildfire? The answer appears to be decades, but human assistance can accelerate this process as described below.

Scientists have observed that after a low-intensity fire, such as the wildfires that commonly occur in semi-arid grasslands or during prescribed burns, the soil after wildfire appears to be relatively undisturbed immediately after the fire but it then tends to deteriorate over the next few months. This process has been attributed to water held in the soil turning into water vapor during the fire and breaking up the soil aggregates. This disturbance of the soil structure leads to the soil emitting fairly large amounts of carbon dioxide from its decaying organic content, which in addition to contributing to global warming also disrupts the soil biome, which needs that carbon to thrive.

Soil Management After A Fire

The most urgent task after a fire is controlling the potential for erosion. A variety of products such as, mats that can be placed over the ground, and fiber rolls that can be placed on slopes to reduce soil loss are commercially available. Hydro mulches that consist of a mixture of organic materials suspended in water can be sprayed over large areas to prevent erosion. Some of these mulches contain soil stimulants that encourage the development of mycorryhizal organisms, which help restore the biome of the soil.

As discussed above, while fires in general enrich the soil, they also tend to remove the nitrogen and the organisms that fix nitrogen from the soil. Because the wildfire effects on soil can be somewhat unpredictable and vary by the intensity of the blaze, soil type, and the type of vegetation present before the fire, it is a good idea to get a comprehensive soil properties test performed before deciding whether to apply a fertilizer and if so, what type. It may also be wise to apply a microbial biostimulant and/or inoculant of beneficial soil bacteria and fungi to help restore the soil biome.

Getting vegetation to grow in the burned area is essential to restore the soil to full function. The choice of vegetation obviously depends on the future use of the land. One option to rapidly restore burned soil to fertility is to sow a fast-growing nitrogen-fixing crop like clover and then mow it to create a layer of mulch before planting the final desired vegetation.

Related posts
Hollywood Quake Fault Line Brings Up Echoes of Sylmar in 1971
August 30, 2020
What Is A Methane Mitigation Barrier Installation?
March 16, 2020
Alabama Hills: A California Geological Treasure
January 15, 2020
How to Prepare an Engineering Report for Foundation Investigations
September 30, 2019
Soil Engineering Reports: Why You Need Them and How They Work
July 29, 2019
What Are Sinkholes, And Why Do They Form?
June 25, 2019
Recent Posts
Blog Categories
Our Services