Hollywood Quake Fault Line Brings Up Echoes of Sylmar in 1971 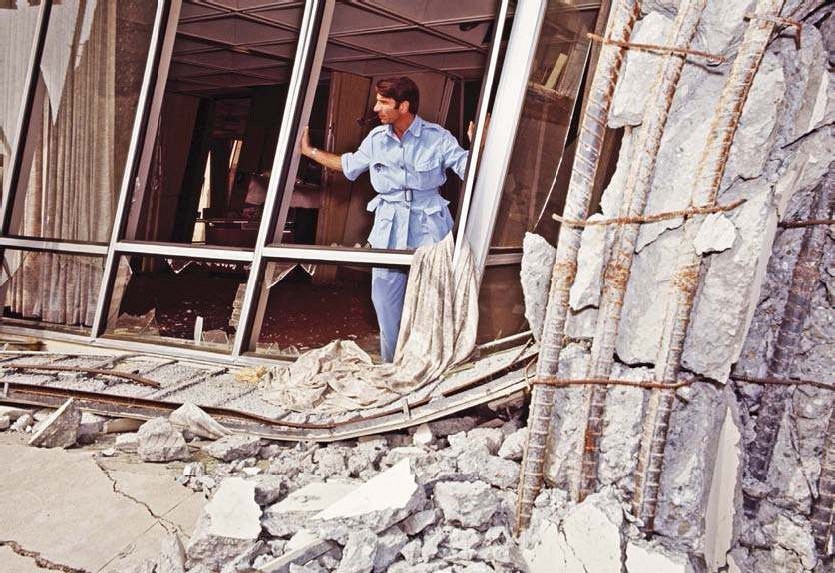 The Capitol Records building is one of Hollywood’s most immediately recognizable — with its cylindrical silhouette, it was always meant to represent a stack of vinyl records in tribute to the work done inside. The site’s future, though, will see several buildings flanking the iconic Capitol Records tower as part of the now-notorious Hollywood Center development. But with new information given to City Planners, suddenly the legislation following Sylmar’s 1971 quake is becoming relevant all over again.

The Hollywood Center is soon to become a fixture of LA’s skyline by taking the prestigious adjacent position to the Capitol Records building. However, new records uncovered by the Los Angeles Times reveal a “shocking” twist in the story: the California Geological Society has formally warned city planners that the east end of the development site has a fault line running directly underneath it.

In fact, the 46 and 35-story towers scheduled to be built on that footprint were unknowingly planned atop more than one active fault line — all considered part of the greater Hollywood Fault.

When you think about famous Los Angeles earthquakes, Hollywood doesn’t ring a bell. But that’s not for lack of potential: in 2014, extensive mapping was done by state officials, indicating that the area is capable of being struck by a vicious 7.0 quake under the right circumstances. For anyone who’s lived through one of California’s major earthquakes, that number is a chilling representation of what’s possible.

Perhaps unsurprisingly, the invisible risk of devastating quakes hasn’t particularly deterred developers, who salivate at the chance to create a massive new real estate feature in the heart of one of the most famous cities in the world. In fact, developer Philip Aarons, founder of Millennium Partners, publicly disagreed with state scientists’ evidence-based warnings. What his dissent is based on is not currently clear, other than to suggest that his private analysts have a better grip on the situation than the “inferior” state scientists.

In fairness to Aarons, perhaps no development site in recent memory has been subject to the level of geological and seismic scrutiny as his. Each side of the current battle is relying on multiple studies done between 2012 and 2019 that sought to analyze the quake risk of the Hollywood Center location. State officials warned that trenching done in 2014 was insufficiently dug to determine the true scope of the liability. Aarons disagrees, pointing to data from the seven existing studies to support his argument.

However, this is no ordinary bureaucratic body making their state-sanctioned assessment of risk: the California Geological Survey is absolutely renowned for their competency, experience, and knowledge. Many scientists watching this battle unfold from the wings know how serious it is when the CGS tells you that there is a dangerous fault underneath your proposed construction site.

LA residents who were around in 1971 probably remember the 6.6 quake that absolutely rocked the Sylmar and surrounding areas that year. In the aftermath of that quake, geologists concluded that 80% of buildings positioned directly on top of fault lines suffered “moderate to severe” damage, as opposed to 30% of those simply abutting them. This study resulted in a still-enforceable California law being enacted that prohibits the construction of buildings straddling an active fault line.

The existence of these laws makes the current Hollywood Center battle a high-stakes drama that will be utterly devastating one side involved.

The central disagreement at present is the definition of an “active” fault line. Depending on where you test in the areas near Hollywood Center, you can find results that suggest both an “active” as well as “inactive” result. The stance of the California Geological Survey is that if one section of a fault is considered active, then the entirety of the fault is considered active. And that assessment is doubly important when the active portions are so close to the development site, as they are with Hollywood Center (about .4 miles away).

These aren’t the first Millennium Partners skyscrapers to run into issues. The Millennium Tower in San Francisco is a notorious nightmare that was almost literally built on a layer of sand, and is now undergoing complex and incredibly expensive retrofitting.

For many, Millennium’s track record is clear evidence that they do not take the geological feasibility of a site into serious consideration when developing their projects. This focus on profit and build-at-all-costs mentality above legitimate safety concerns has many in the community worried about what the future holds.

For now, we’ll still need to wait and see what the final draft of the Hollywood Center’s Environmental Impact report holds when the city unveils it. Before this is done, the City Council and land management use committee will have their own time in the public eye to throw a spotlight on the seismological concerns and public safety issues created by the sleek new towers that may one day grace the Hollywood skyline.

Related posts
Do ADU / Garage Conversions Need A Geotechnical Soil Report?
February 8, 2022
What Is A Methane Mitigation Barrier Installation?
March 16, 2020
Alabama Hills: A California Geological Treasure
January 15, 2020
How Do Wildfires Affect Soil?
November 12, 2019
What Are Sinkholes, And Why Do They Form?
June 25, 2019
What Is Farming Carbon Capture?
May 28, 2019
Recent Posts
Blog Categories
Our Services