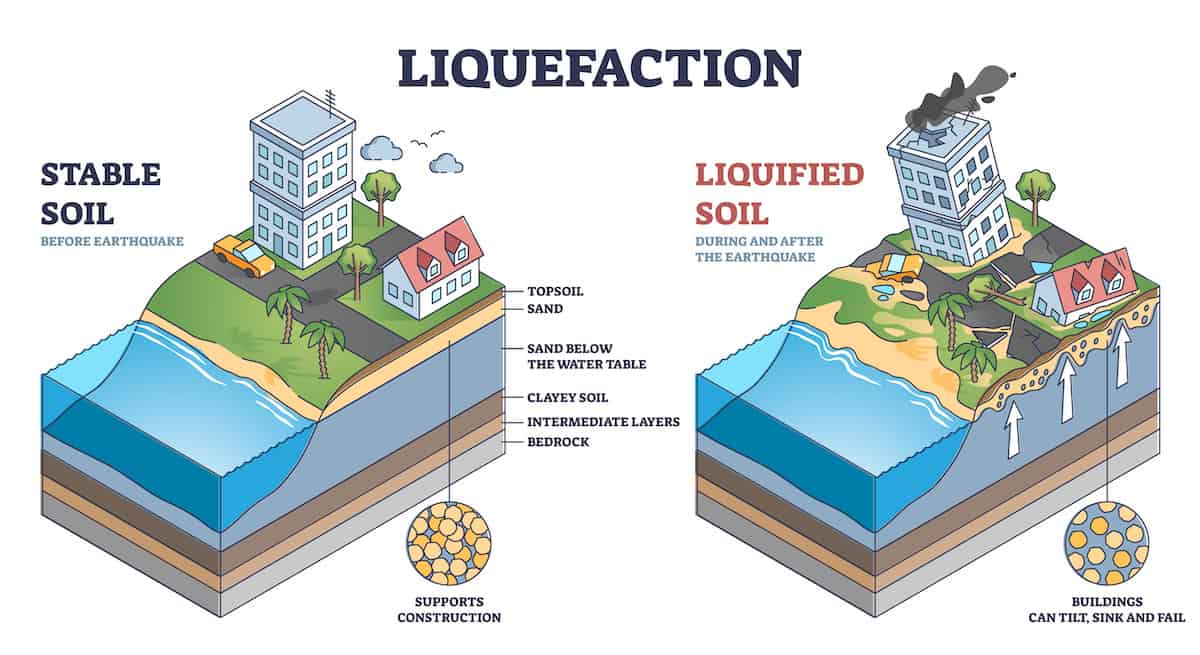 Soil liquefaction is a geological phenomenon that changes the structure of the Earth’s soil. External stressors loosen the soil particles, changing the ground into a less stable base for buildings and other structures.

Soil liquefaction presents risks to construction companies building in high-soil liquefaction areas, such as California. If builders construct on top of loose soil, it can damage the integrity of the buildings and cause structural damage or collapse. To mitigate these risks, builders should work with a qualified geotechnical engineer to assess the soil before beginning a construction project.

When affected by this phenomenon, the soil particles follow the path of least resistance and become more viscous, resembling quicksand. This type of soil loses its ability to support loads like engineered buildings.

Structures standing on liquefying soil lose their structural integrity, causing them to tilt or collapse. Most objects like cars and trucks sink under the surface, and underground utility lines such as water and natural gas rupture, causing severe damage and presenting a significant threat to life and property.

Origins of the Term

Although soil liquefaction events have occurred numerous times throughout history, hydraulics expert Allen Hazen first coined the term in 1918 to describe the failure of the Calaveras Dam in Fremont, California. Hazen described the phenomenon as “similar to quicksand.”

However, it wasn’t until the 1964 earthquakes in Niigata, Japan, and throughout Alaska that the geo-engineering community took an interest in studying soil liquefaction. Today, the International Building Code and most countries’ national building regulations require new construction to factor soil and earthquake liquefaction into the design of new buildings, bridges, and dams.

What is a Liquefaction Zone?

A ​​liquefaction zone is an area assessed by local geotechnical engineers where the soil is compacted or mainly composed of low-density particles, such as sand, landfill, or silt. These zones are the most susceptible to soil liquefaction damage.

According to the United States Geological Survey (USGS), many areas in California are in a liquefaction zone, including the Los Angeles Basin, Orange County, the San Francisco Bay Area, northwestern Alameda County, and northern Santa Clara Valley.

For instance, the USGS estimates that approximately 25% of the SF Bay Area is in the three highest liquefaction risk levels, which are moderate, high, and very high. A prominent example is the 58-story Millennium Tower in downtown San Francisco. In 2015, property developers discovered that the tower was slowly sinking and tilting due to soil liquefaction.

What is the Process of Liquefaction?

The soil in a liquefaction zone mainly comprises loosely-packed particles held together by the friction created by groundwater molecules. When an earthquake disturbs the soil, the soil particles soften, destabilize, and lose their strength, causing the surface to shift and sink downward in a process called ground surface subsidence until the soil particles naturally settle in a more compact state.

The result causes the soil to become slurry or semi-liquid, damaging or destroying structures, buildings, and other objects. If the event occurs on a slope, the ground may slip down and cause lateral spreading, inducing a tearing effect on structures and underground utilities.

In extreme cases, soil flotation can even occur, causing light structures buried at shallow ground depths like a sewer line to float to the surface.

How to Reduce the Hazards of Soil Liquefaction

Soil improvement techniques aim to increase the density and strength of the underlying soil, using tools such as vibroflotation probes, dynamic soil compaction equipment, improving the soil’s drainage capabilities with wick drains, or implanting stone columns into the ground.

At Applied Earth Sciences (AES), we aim to provide expert geotechnical engineering solutions for building projects of all sizes. We have over three decades of experience analyzing soil and partnering with companies in Southern California to ensure your structures’ safety, stability, and reliability when building in a soil liquefaction zone.

Related posts
Why Should You Hire a Geologist?
February 14, 2022
What Is A Methane Mitigation Barrier Installation?
March 16, 2020
Alabama Hills: A California Geological Treasure
January 15, 2020
Soil Engineering Reports: Why You Need Them and How They Work
July 29, 2019
What Are Sinkholes, And Why Do They Form?
June 25, 2019
What Is Farming Carbon Capture?
May 28, 2019
Recent Posts
Blog Categories
Our Services