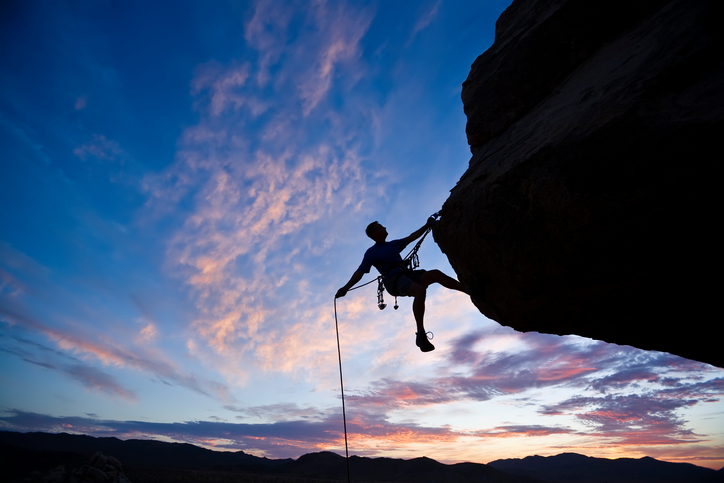 Rock climbing is one of America’s most popular outdoor activities. According to the Outdoor Foundation, about 6.3 million people participated in various forms of climbing in 2015. It also has the distinction of being by far the most interesting sport for anyone who is fascinated by geology! What could be better than scaling massive rock formations, hundreds of feet above the earth — in a pristine, natural setting, no less.

How do different types of rock affect rock climbers?

If you’ve never actually rock climbed or thought that much about it before, you might be surprised to discover the dramatic influence the type of rock can have on a climber’s strategy and overall experience. For example, granite climbs tend to follow natural crack systems, and involve traversing huge, often polished slabs of rock. Sandstone climbs, on the other hand, are often friction-heavy scrambles up a pocketed, feature-rich rock face. Rock climbing is inherently a puzzle that demands your ability to analyze the rock for the best lines and holds for you to utilize on your ascent. Think of different rock types as like different “game boards” — distinctive characteristics in each rock type act like palettes that determine the basic composition of your climb.

Besides technique, there’s also the safety aspect that is so critically linked to the sport of climbing. Sport climbing relies on bolts that are pre-drilled several inches into the rock. Climbers clip their rope through carabiners that are attached to these bolts, and if they fall they will be caught by this protection. Traditional climbing, on the other hand, requires the climber to place removable protection into natural rock features they come across, such as pockets, cracks, and flakes. These removable pieces of protection include simple nuts and stoppers, which wedge into constrictions in the rock, as well as sophisticated cams that mechanically exert force outward in order to wedge into the rock.

For traditional climbers, the ability to quickly and accurately surmise the rock’s geological makeup and aesthetic features is absolutely critical. It takes an experienced, trained eye to look at a fissure in a rock and be able to determine which piece of protection will reliably fit inside… and hold against the dynamic force of a climber fall. A veteran rock climber will have an intimate knowledge of the various types of rock that are generally climbed, as well as their positive and negative implications for the climber.

What types of rock are usually climbed?

Thanks to some fairly extensive research done by Jessica Ball over at the American Geophysical Union blog, we have a pretty good idea of the types of rock favored by climbers.

Jessica’s data surveyed 118 major climbing areas in the United States, comprising a good representative sample in terms of popularity. According to her data, these are the most common rock types she found:

From the looks of this data, it appears that granite — the stone found in legendary rock climbing areas Yosemite and Joshua Tree — is the most popular type of rock to climb in the United States.

How do climbing techniques take advantage of the rock’s natural features?

Scaling a vast rock face is much more involved than simply climbing a ladder. After all, when these massive crags were formed millions of years ago, they did not care whether they would one day be easily climbable by a human. Therefore, rock climbers must adapt to the rock rather than the other way around.

One of the most common styles of climbing is known as “crack climbing.” Since so many granite and sandstone walls have crack systems present, it only makes sense to utilize the rock’s natural features to ascend. In crack climbing, the climber will jam as much of their fingers, hands, arms, legs, or feet as they can into the crack (depending on the crack width). By “camming” their body parts into the constrictions in the crack, they are able to achieve leverage and hoist themselves up bit by bit.

How can I get involved in rock climbing?

Be aware that rock climbing is an inherently dangerous sport, especially if you don’t know what you’re doing. If you’re interested in getting involved in climbing, it might be a good idea to visit a local indoor climbing gym where you can learn safety basics, gain some experience, and meet mentors who can potentially introduce you to the thrill of climbing in the great outdoors.

Related posts
California Cliffs Are At Risk Of Collapse
December 22, 2017
Massive Rockfall On El Capitan In Yosemite
October 27, 2017
Ascent of El Capitan’s Dawn Wall May Be Repeated This Week
November 21, 2016
A Look At Bishop’s Boulders
October 21, 2016
Leave No Trace Except Footprints
July 21, 2016
How Was Yosemite Formed?
June 30, 2016
Recent Posts
Blog Categories
Our Services