A Look At Bishop’s Boulders 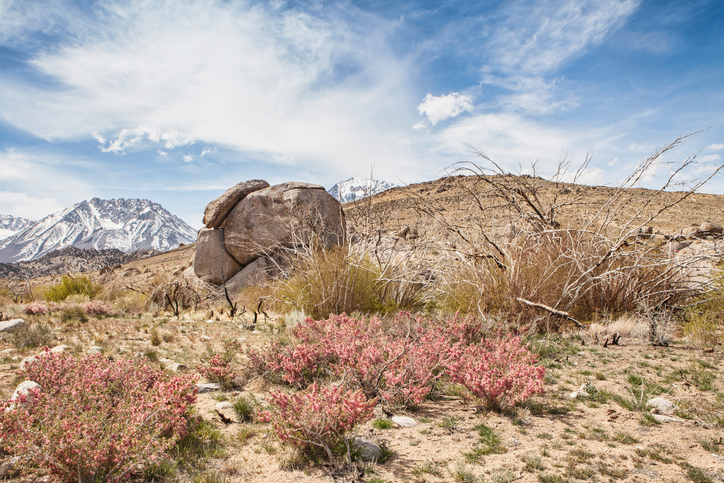 On the western limits of the Owens Valley just outside of Bishop, CA, lies a legendary geological and ecological area known as The Buttermilks.

You would think that California already had as much awe-inspiring geology as it could handle, considering the state is home to Yosemite Valley, Stoney Point, Tahquitz, and other mind-bogglingly beautiful rock formations. Yet, the universe blessed the eastern foothills of the Sierra Nevada range with yet another gorgeous natural feature.

The Buttermilks are probably best known within America’s sizable rock climbing community, who have long known the area as a mecca for bouldering. Bouldering is a form of rock climbing that focuses on short routes scaling — you guessed it — boulders. Unlike large mountain or wall climbing, bouldering does not include the use of a rope. Instead, crash pads are lain carefully under the route in case the climber falls off during their attempt.

Another way bouldering differs from rock climbing is the height involved. Bouldering has more of an emphasis on short, explosively gymnastic moves, and some of the world’s hardest bouldering problems might occur only 10-12 feet off the ground. However, Buttermilk Country in Bishop is renowned for what’s known as highball boulders, or bouldering problems that combine difficulty with sheer size and scale. This is because the area has some of the most jaw-droppingly huge boulders to be found anywhere.

What Are Bishop’s Boulders?

The boulders in the Buttermilks are glacial erratic boulders made up of quartz monzonite. A glacial erratic is a type of rock that does not match the rock composition found in the area in which it lies. This is because, ages ago, glacial ice carried these massive boulders far from their original location. The result is a stunning array of giant rock features that simply look nothing like their surroundings.

Erratics are especially fascinating to geologists because they contain incredibly valuable clues about glacial movements, global climate patterns, and ice flow routes. Geologists study their size, composition, angularity, and a host of other features to learn more about the way the erratics came to settle in that region.

Scientists have only really fully understood the mystery of erratics for about a century and a half, and even Charles Darwin himself dedicated himself to understanding the phenomenon for a time.

Today, if you live in California and want to marvel at the wonder and beauty of massive glacial erratics, look no further than Buttermilk Country in Bishop, CA. And who knows — you might just try and climb a few, too!